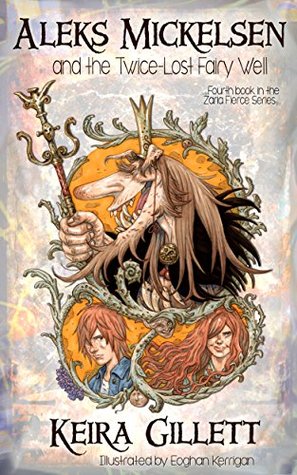 I was given a copy of this audiobook from the author in exchange for an honest review.

I was super happy when book 4 in the Zaria Fierce series was released. This book follows Aleks and his journey towards either becoming totally human, or remaining changeling. It threw me off at first, but this book occurs 3 years after book 3 ends.

The day started out odd compared to every other day. First his mom lost her fridge, and then there was a fire in the chem lab at school. After school, on a plane ride with a few of the guys, the plane suddenly crashed. After the police brought the boys home, and Aleks to his house, Aleks went to his room, where Nori began knocking on his window. Nori convinced Aleks to get Zaria and come help find Fritjof, the last dragon, that is trying to escape.

Aleks, Geirr, Filip, Zaria, Christoffer, and Henrick all agree to follow Nori on the adventure to prevent Fritjof from escaping the Under Realm and end the pending throne war in Niffleheim. Aleks is worried as his age of maturity as a changeling is fast approaching. If he is still away from his human home at this time, he will stay that way forever. The group go on a wild adventure together, getting captured by the Wild Hunt all over again, to see that the king had been overthrown, and the first borns had been captured.

This story was just as amazing as the first 3 stories in the series. My biggest, and only, issue I had with the story was that the narrator changed the voice of Henrick in the story. It started out with one specific voice, however, as the story continued he began to sound EXACTLY like Hector, his father. That is really the only issue I had. Like the three before it, this story went fast and now I am saddened I have to wait for book 5 :(. There is so much that I loved about this story. Aleks is one of my favorite characters and I am so excited that he is getting his own stories so that readers can learn more about him and go on this journey of self discovery along with him and his friends.