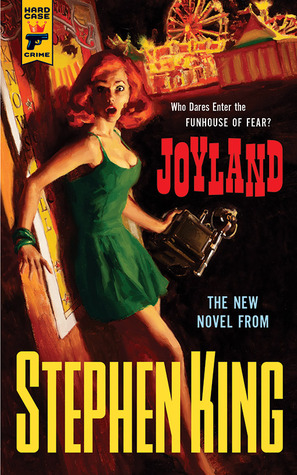 I picked up this story on Audible to listen on a work trip. My unconventional book club’s theme is to pick a book off a list/flow chart provided, and I decided, since I have never ever read a Stephen King story, I would like to get a good start somewhere.

First, this story is classified on two different genre subtypes on Goodreads, Suspense/Thriller and Coming of Age. On the flow chart provided, it was indicated as a Suspense. This is really where I want to start my review:

My expectations for Joyland were more along the line of It, and Pet Semetary. To me, that is what suspense/thriller means. However, that is not what this story was. This story is about a young college student, Devin Jones, getting a summer job at Joyland theme park in North Carolina. Devin discovers that a few years prior, there was a murder on one of the rides and no one was ever caught. He was also informed that at some point in time, he would come across two children: a girl and a boy, and of these two children one would have the “sight.” Devin Jones has his heart broken by his first love and this adventure shows him how to move on and provides life experiences that any college kid would be lucky to have. The only real suspense in the story is about a chapter, when he discovers who the Carnival Killer was. I kind of pegged this person, but really was leaning on a different character. I will let you decide who is who.

This book was wonderfully narrated. It took me a couple of hours to really get into the book as a whole, but once it got going, it was really brilliant. The story really  hits on all the feels you want in a book. My wish was that, for a classification of suspense, that there was more suspense in the book, beyond the short info at the tail end of the story.

I will read Stephen King again. I really like the versatility of King’s writings. I really enjoy discussing this book with my fellow book clubbers!