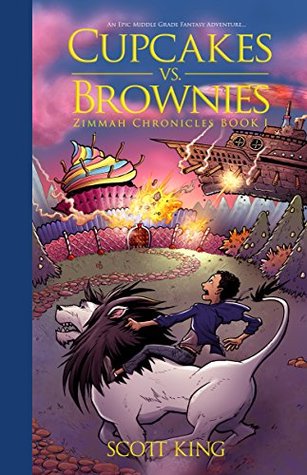 I was given a copy of this book for free through Audiobookblast.com in exchange for my honest review. I have not been paid for my review. These opinions are my own.

This book is a Middle Grade adventure of Karim, a young boy, who finds a Djinn’s lamp (the Djinn’s name is Zimmah). Karim wishes for the world to be a happier place, and WHAM! Everything is dessert. EVERYTHING. #Candypunk Though this world should be a happy place, there is a war going on between the Cupcake King and the Brownie Queen. Rewinding a bit, prior to finding the lamp, Karim overheard an argument between his mom and dad. Karim has gluten allergies. His father was supposed to pick up vegan gluten free brownies for his birthday his mom had special ordered, he forgot. So Father went to a different bakery, believed to be gluten free and brought cupcakes, which after mom swatted them out of his hands, engaged in a verbal altercation. Results? Dad asked for a divorce.

The Cupcake King is Karim’s father, but the King does not know Karim in the new setting. The Brownie Queen is Karim’s mother, and again, does not know Karim. Karim races through the story with his dog (turned into a Lion) trying to get Zimmah to turn the world back to normal, and that a world made of treats was not what he meant by Happy World.

Karim learns that his parents will always argue. Always. He learns through this adventure that he can be happy even if they are not together. There are a lot of lessons that Middle Grade kids can learn and take away. The lessons are presented in a fashion that are enjoyable and not in your face about what the issues are.

My only qualm with this story is that the story ended, the lamp was tossed in concrete to be buried, but there is a second book. It is not a traditional cliffhanger, just confusing. I do look forward to reading the next book though!