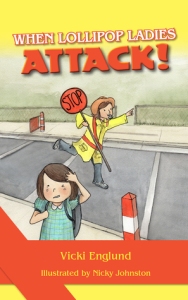 I won this book in a Goodreads Giveaway.

First, I want to say, that I did not know that a “Lollipop Lady” was a crossing guard. I am glad that the author included that tidbit of information when I received the book. I would have figured it out, but I had no clue that is what it was called in the UK and Australia 🙂

This book was short and sweet. It contained multiple messages within the text that I think would be enjoyable for it’s age range. We all have those mothers that we are often embarrassed by, but realize that they are actually pretty cool after a while.

For example, I was on a school trip with my brother in Barcelona and none of our luggage made it so we had to go do a little shopping to hold us over. One mother picked out this shirt that she thought was SUPER cute but neither of her girls liked it. One of the girls was 14 and the other was 24. I thought it was cute, so I bought it. When I wore it, the two girls couldn’t believe how cute it was and asked me where I got it. I told them it was the shirt their mother picked out earlier at the store. I can’t even begin to tell you how often I did that to my mom when I was younger! We don’t even give the object a passing glance because our mother picked it out.

This story touches on one of these moments, where kids are embarrassed about what their parents do for a living because their friends’ parents all have “important” jobs. Abby had to learn that a Lollipop Lady’s job is just as important, as say a doctor, because they keep children safe.

I like how each chapter is short and to the point and takes place on a specific day of the week. The font is big and well suited for the age group the story was written for. The language was age appropriate. I will be keeping this book for when I have kids one day 🙂