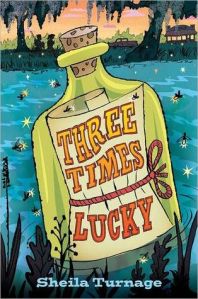 I listened to this book on audio. The narrator was a younger female who read the role as Mo, the primary character in the story. I have read a lot of other people’s reviews of the book, and it seems like a lot of us had similar confusions about the story itself. I know I don’t summarize books often, but with this story I will give a brief synopsis.

Mo was washed up on the shore in South Carolina during a hurricane when she was a new born. She was found by a man nicknamed Colonel, who happened to have had a car crash and lost his memory. A murder of a local man in their little town sends the entire town into a furry. Mo decided to try and help and began her own make shift detective agency (she is 12 years old). There were actually a lot of clues Mo found that the detective didn’t. The story progresses and you ultimately find out who the killer is, and the story ends. During the story, Mo often sends messages in a bottle to her “upstream mother” trying to find her biological mother.

This story has a lot of buildup, but just did not pack that punch. Though the story is a feel goodish novel, it wasn’t WOW. I actually had to renew the audiobook in order to finish it, and it wasn’t that long. I don’t want to give any spoilers, so my summary was minimal.

As for the narration, it was nicely done. She had a lot of spunk and brought the characters to life. Where the story fell short for me, is that I couldn’t figure out what they were supposed to have looked like. I have no idea what Mo looks like, or really the little town. I feel like the story fell short in a lot of the description. If it had described more, then I think the story would have been better.