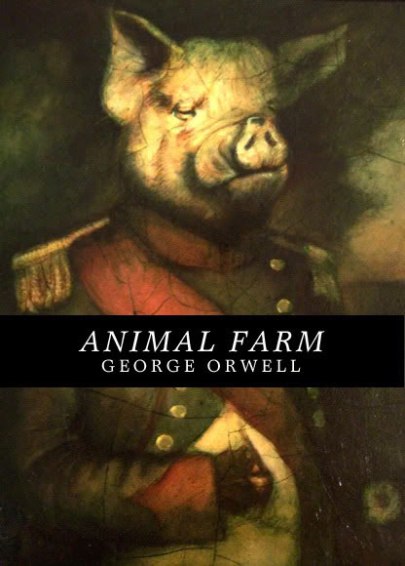 So, I finally read Animal Farm by George Orwell, and let me say, I am glad I waited until I was 28 to read it. Many people read this in high school, I never had to, I was in different English classes and read different books. I can tell you this, I loved Orwell’s 1984, and after reading Animal Farm, I want to re-read 1984 to see what concepts I missed because I was too young to grasp or understand…

On Goodreads, I have seen this review: “The last line of the book, was quite amazing. The way the author left the reader, it kind of dazed me for a few seconds. The thought of pigs turning into humans, not physically, but mentally. The way the pigs had dressed, eaten, even walked. I really did like the backstory, the book though in general? Not so much.” This is only part of the review, the rest really didn’t say much except she liked Boxer because she likes horses. The comments section mentioned how they didn’t like the story either. My point? They are 14. I have wondered if I should make a response on this comment as well. That they seemed to MISS THE ENTIRE POINT OF THE BOOK. It is not merely about animals over taking a farm, it is so much more than that. She also said she “loves WWII and is a big history geek”….yet she doesn’t seem to realize this book was not about the entirely about the war (but merely references the relationship between Nazis and Soviets, the Allies and a few other incidences that occurred on the farm)? My heart is saddened by the way our youth are heading. Granted, when I was 14, I wouldn’t have recognized a book about communism and broken human nature if it beat me bloody and took all I had.

George Orwell was one interesting human being. I love his shock value. I understand what the book is about, however, I went ahead and did a little research behind the book and found who the characters represent in the story. That really brought this entire book together for me in my understanding fully. I will share it with you:

Now fully understanding that Marx was intended to represent Major, the passages I marked clearly in my book for future references really bring home how it became so easy for the likes of Stalin to come into power. When the impoverished are already broken, and are presented with a possible savior, how easy it is to stand behind that leader in hopes for a better and brighter future? When there is no hope left, how easy it is to see a sliver dangled on a string in front of their faces, to accept it no matter what the cost, because, “it wasn’t as bad as it was before…” even when they could no longer remember what it was like before. Because nothing changed. Eventually, everything came back around to what it was before the Revolution. Except with new leaders.

“And remember also that in fighting against Man, we must not come to resemble him. Even when you have conquered him, do not adopt his vices.”……”The creatures outside looked from pig to man, and from man to pig, and from pig to man again; but already it was impossible to say which was which.” These two quotes, the first in the beginning of the book during Major’s speech and the second being the last line of the book, specifically pinpoint where the Stalinist took the beginning ideals and corrupted them. I learned that Orwell believed in Socialist ideals, and that this book was a jab at Stalin because he took the ideal in the perverse form and ended up in a totalitarian form of government. One that knew of the “lower animals” lack of intelligence and understanding of what was actually happening. These perverse leaders taking advantage of the “lower animals” and making sure that the “lower animals” knew or at least believed, that 1) things were better than when Mr. Jones was around and 2) it is all for the greater good. And using mouthpieces like the likes of Squealer, helped ease the confusion, and the beautifully seductive words that came from his mouth recaptured, revitalized and eased any confusion or possible unease to rest.

I know that this book was geared toward Stalinism, but I like how I can apply various details from not only Animal Farm, but books like The Handmaid’s Tale, 1984, and others to our lives now. It’s curious. And frightening.