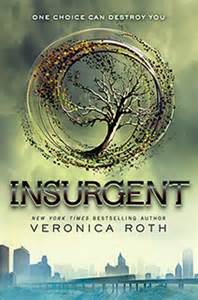 Where do I even begin? I guess a rating? I give this book an overall 4 stars. Up until the last two or three chapters, the rating would have been much lower.

One of my main issues, and pet peeves with books, is when scenes suddenly change. I found myself often having to re-read passages to make sure I was following along correctly. In one sentence, they would be in one situation, but the next sentence would be hours later. That is very hard for my brain to switch from one to the other so drastically. This happened a lot more frequently during the middle of the book, up until after Tris was rescued. In fact, every chapter in which Tris was being tortured, I had to re-read multiple passages. HOWEVER! Man that ending!! The last couple of chapters really pushed that rating up!

Overall, the book wasn’t bad. It was continuously stimulating. Tris is a little annoying, with her constant questioning, and beating herself up. Where is her confidence?! Maybe that is the whole point of her particular level of Divergence…either way, mentally she appears weak, but always comes out strong, yet puts herself down and makes her self weak again. And then gets angry when others either thinks she is too young, thinks she is too weak, or thinks anything other than what she thinks of herself. I guess it is better than the alternative, where the female characters ARE weak and flaky, you know the ones I am talking about right? I know I have gone off on a tirade before in a previous blog how weak female characters is the bane of female existence? Princess Syndrome should not be reflected in YA books because so many of the readers are impressionable, young, females, who might not necessarily have other strong female influences in their lives. Being a damsel in distress is made to look awesome, where each girl wants their own Edward to protect and love them like Bella. Or those whiny females that can’t fathom going through the emotions and feelings, that are related to being a TEENAGER. Seriously, STRONG FEMALE CHARACTERS are needed! Take Cathy in the Split Worlds series (previous posting), she was a strong female character who went against what it was meant to be a woman! The Fae continued to place women in the same roles as in the earlier, medieval and 18th-19th century, with no rights, no say, just look pretty and give me heirs. Cathy FOUGHT this ideal like all the other women in the suffrage movement that gave us a voice. (I seriously just diverged a little, however, as you can see, I have strong feelings towards weak female characters in books because often times, readers RELATE to the characters and if a female character can’t cope, then the reader feels defenseless and unable to cope as well). Tris pushes that line. She is strong, but she lacks confidence. She is wreck-less, but she puts the lives of everyone before herself. She is somewhat relate-able, but she is almost entirely unreasonable. Which makes Tris a fickle character and one I don’t think I would want younger females to aspire to be like. What is the point of a strong character, who lacks confidence and makes herself weak with her own harshness?

I hope, with how Insurgent ended, it will give Tris that confidence in Allegiant. That is my hope anyway.