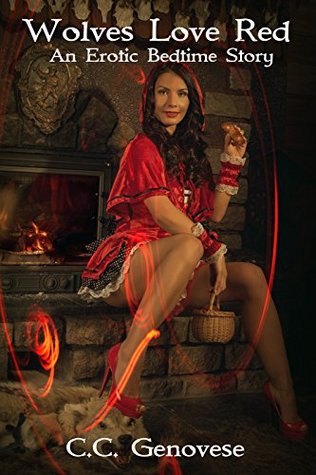 This is my first book I have read by this author. It is a quick read, but very intriguing. It follows a werewolf, named Valan, who catches the scent of Red, a rather ravishing woman. On the night the werewolf first gets a whiff of Red, he can hardly contain himself. He begins pleasuring himself in a nearby alley, however, he has to immediately run to the woods because when he orgasms, he howls, and he did not want to alert the town of his presence. He goes off into the woods where he has a wild romp with another wolf, named Fiona. Fiona asks about the woman who had him fired up like that, but he is reluctant to really give away anything.

The next day he goes looking for Red again, because he really wants her. He discovers she is bringing some sex toys to grandma’s house, who happens to be the town bicycle. He comes up with the idea to go to Grandma’s house to wait for Red to get there. Instead, he comes across Fiona. Fiona again is curious about the woman who has Valan so wound up. Fiona suggests taking Grandma off his hands, because Fiona heard she likes blonde bombshells, so that Valan can have his woman. Fiona takes Grandma and her current client off into another room, so when Red comes in and sees a very naked, human Valan, she becomes entranced. Valan is very well endowed, which is mentioned several times. So there is a lot of foreplay to help Red take him.

I will not give away the ending, because it was so amazingly unexpected. I really enjoyed this story overall. My issue I often have with short stories/novellas, is that many authors try to rush everything together. Some stories do not have a beginning, middle, and end. Wolves Love Red did have all parts to make a good story. It was easy to follow along with, it had the right amount of background information to set the scene, it had enough character development, and it didn’t feel like everything was rushed together. The sex scenes that were in the book were well written and very descriptive, so it was easy to imagine while you were reading it. Even though the story as a whole is good, the ending makes it all worth it. The ending is what takes this story out of the normal cookie cutter short story/erotic/paranormal/twisted retelling mold and makes it something completely unique.