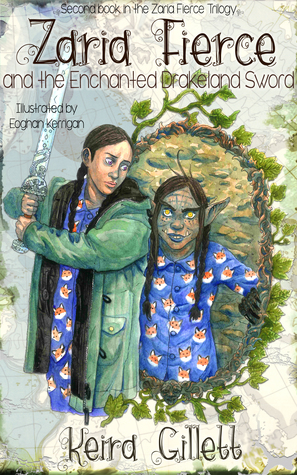 I was given a copy of this audiobook from the author in exchange for my honest review. These thoughts are my own. I have not been paid for this review.

Zaria Fierce and Enchanted Drakeland Sword is the second book in the Zaria Fierce trilogy. This story follows the aftermath of Hart being stolen by Olaf. Hector comes for Zaria and her friends for another adventure into the heart of many lands in Norse mythology.

Zaria continues to be haunted by nightmares and self blame regarding the loss of Heart, the Staglord of the Elkenfolken’s son, Hart. All of the children set off in hopes to find the Enchanted Drakeland Sword and find where Hart is being kept by Olaf. Along the way, they meet many Giants, some who are helpful and others who are not. Eventually they make their way into the land of dwarves.

Zaria keeps having these visions where she sees a spector of sorts who looks like her. She is sleeping in her bed when it wakes her up. It tells her it is slowly turning into her and will eventually make his way up to surface with people of Earth and will fool them all into thinking he is her. He then flees, which causes Zaria to follow after him down the dwarvan tunnels through a hidden magical door. Once through, she finds Hart, and frees him with her newly acquired Drakeland Sword. Only, it wasn’t Hart, it was Koll, the deadly dragon Olaf is desperate to free from the Under Realm where he has been trapped for thousands of years.

To save from any spoilers, I will end the synopsis here because the adventure is worth the read, or listen. The narrator is fantastic, bringing each of the characters alive. Each character is well written and has continual growth. The reason I gave this 4.5 stars, instead of 5, was simply because Zaria was almost whiney, and it got annoying after a while. Also, out of all 3 books, this one was my least favorite. I felt that it did not accomplish as much as book 1, and book 3 (review to come soon). I felt it took me longer to get through and I needed frequent breaks. It is worth reading, and getting through, because book 3 was spectacular and a fantastic way to end the trilogy.

Final thought: This is a great series filled with Norse folklore adventures for young readers, but can be enjoyed by all