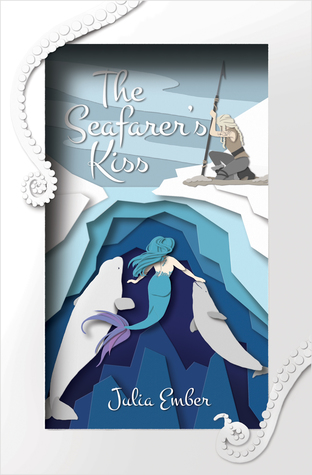 The Seafarer’s Kiss by Julia Ember

I received a free copy of this book in exchange for an honest review. I would like to think the author for this opportunity.

Ersel (sounds like Ursula, doesn’t it??) is not a princess. She is anxiously waiting The Grading, where someone from Aegir’s court comes and determines the mermaids who come of age’s fertility and how many children “eggs” they can hatch to keep the population up. Once the number is released, this number follows them forever. If the number is high, then the males began fighting for them as mates. Ersel is desperately afraid and her dream is to leave the icy glacier their kingdom is situated and experience the rest of the world. Prior to The Grading, she meets and protects and young woman named Ragna, which she falls in love with. Eventually, she is found by her former friend, who betrayed her becoming a guard for the evil king, and is informed that she no longer had a choice but to become her mate. After The Grading, she makes a deal with Loki, knowing she should not. This deal went awry and she was turned into a “monster,” her fins turned into legs similar to Ursula’s. In order to prevent any potential spoilers, she is banished and takes up residence in a boat that has been shipwrecked since Ersel was a child. Loki visits her again to strike up a new deal in order to get her fins back, or something else she desires. Ersel then moves forward in the story with this new deal in mind.

I will not give away the end, but the second part of this story was much better than the first part. I felt that the story was a bit boring prior to Ersel’s banishment. I felt the relationship with Ragna came off kind of forced (from a writer perspective, not that Ersel was forced into a relationship by Ragna), specifically the intimate interactions the two encountered together. I also had a hard time connecting with any particular character and I felt disappointed with the end of the story.

Even though I feel this story is 3.5 overall, I still gave it a 4 star rating because I felt the retelling was a very unique aspect. I felt the imagery of the story was great, and for the  most part, I could visualize along with the story’s narrator. I especially liked the Norse aspect of included in the story. By the end of the story, I still thought this would be a great segue into Ursula/Sea Witch territory for a retelling!

This story is a pretty quick read and flows easily. It is just over 200 pages and can be easily knocked out in a day, depending on the kind of time a reader has to give it. I do wish it was a bit longer, in order to add more into the story to help connect, but if there is a sequel, I will definitely read it. At the end of the day, I would recommend this to others. Just because I did not connect, does not mean others will not. A lot of people really enjoy the book, I just wish there was more and felt parts a bit boring and hard to get through. I enjoyed the author’s writing style, which is important as well.