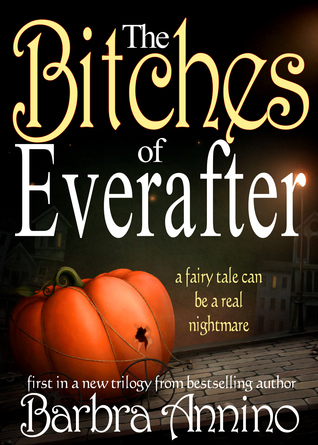 I found this book on kindle randomly. I decided I would listen to the audiobook version because lately, I have a hard time reading any books because of work and school.

I want to start off with the Narrator. Erin Fossa is just okay for me. I found the voices to be kind of off and sometimes couldn’t tell who was talking. I also felt like some sentences were forced and it felt like the chapters suddenly ended, but the narrator’s voice inflection made it feel as if there was more to come.

So what is this story about? Basically, Snow White, Belle, Rapunzel, Cinderella, and Aurora are all sentenced by Red Riding Hood (who is Judge) to this boarding house for various crimes they have committed. Then, Snow White figures out she is Snow White, and slowly the other girls figure out who they are. It turns out, that some other person has brought various characters of fairy tales from fairyland to a town called Everafter. Judge Red Hood is set out to permanently lock up these “Bitches” in order to keep, what you eventually learn is a curse, from being broken. Each character, except Snow White really, has some weird twisted storyline. I hate that Rapunzel is called Punzie and Aurora is called Aura. I think the behaviors of the princesses were also super far fetched to the point where the story was not believable at points, even for a fairytale. I think the book ended in an interesting twist, but it does not look like the other books are yet released? This book came out in 2014. So I will need to do some digging eventually 🙂