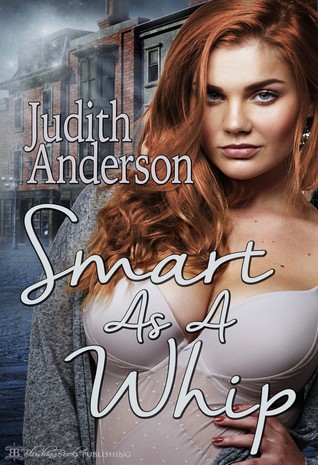 Smart as a Whip by Judith Anderson

I received an email submission for Smart as a Whip in exchange for an honest review!

If Rebel Wilson and Albert  Einstein had a love child, it would be Kimber Cassidy.

Kimber Cassidy : If you think she’s too much for you, you’re probably right

Coming close to giving up on her cherished dream of following

in her father’s footsteps, Kimber Cassidy, a plus-size

voluptuous beauty in her mid-twenties, jumps at the chance to

clear the name of a family friend, Manny. There’s been a

for the crime. In order to keep an innocent man from spending

his life in jail, Kimber needs to use the logical and analytical

skills taught to her by her father, a detective with the East Alton

police, who was killed in the line of duty when she was just

During her investigation into not only the murder, but also the

member of The Playspace; a local kinky club. But it won’t be

easy. During her adventure, she’ll come to know things not only

about her family, but about also about herself, that will shake

her to the core.

Jeremy, another club member who is as sexy as he is

dominant. As she delves deeper into the world of spanking and

bondage, she discovers her deepest dark desires, but will she

get lost in them? Only by relying on her father’s advice, facing

I was very excited to receive this book, I had been wanting to read it since shortly after it came out.

My overall opinion is that the book is original and can hold it’s own in the genre. This is slated as an erotica with an overall story beyond straight sex.  My qualm with this, I feel the rest of the story has more development and I find the sex scenes more lackluster. This story is a prime example. I felt the sex scenes could have been longer or at least in more detail. Or maybe I just wanted them to be longer and more detailed. I like to get worked up when I read erotica.  As far as the underlying story, I would have liked to learn more about the private investigation that Kimber was doing on the side of her actual job. I felt that, because this is a shorter story, that some aspects were glided over and became missed opportunities. It would have been nice to feel connected to Kimber instead of an observer of Kimber’s everyday life.

Judith Anderson lives in the Midwest and has been living

In 2015, she self-published Pretty When You Cry, an

anthology of her short stories, available on Amazon. It was

by Blushing Books in Janurary 2016. She enjoys going for walks,

reading mysteries, listening to music and the sound of begging.

She particularly enjoys the begging. Especially accompanied by

Check out these links: