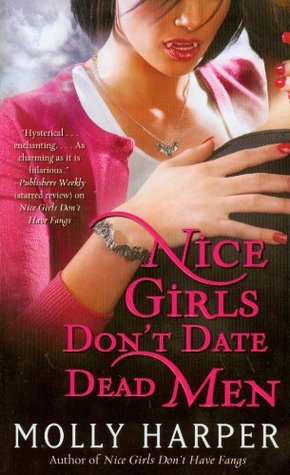 This is book 2 in the Jane Jameson series. I read the first one in 2014, and enjoyed it immensely. I got my mom hooked on this series and pretty much every series written by Molly Harper and she has listened to every single audiobook out there in existence of Molly Harper’s.

I was a little disappointed with this book. I felt there was so much action and drama to get through, this book just kind of fell flat for me. I felt there was too much back and forth drama between Jane and Gabriel that was annoying and I would have given up on a LONG time ago. I felt what was going on with Zeb could have had a bigger impact or plot thickener than what it was.

I was also a bit turned off by Jane’s family and am HOPING this changes. I also felt it was unjust that the Grandma felt the way she did about Jane…but in light of the discoveries Jane made…Grandma wasn’t upset or dissuaded with her own life possibly on the fringe of ending. For most of the story being based on Jolene, I felt like there is still more to know about the family and I wished it would have gotten into it on a deeper level.

Amanda Ronconi is a great narrator and delivered again in the sequel to Nice Girls Don’t Have Fangs. I am looking forward to making my way through the rest of this series and I hope that the unanswered questions left dangling in this book, will be answered soon!