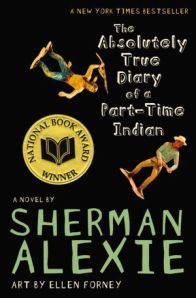 I am on a mission to read all the books that are banned or challenged in the US. I want to point out that upon some investigating of these banned/challenged books, most of them have a subject matter that happened in the US or is currently happening in the US. For example, To Kill a Mockingbird has been banned or challenged in many states because of its strong story line regarding racism in the south. I want to point out, that many of the states banning or challenging this book are SOUTHERN. Now, I am from the south. I was born in Mississippi. I don’t think you can get more southern than that. I think books like To Kill a Mockingbird are important. I don’t agree that it puts the south in a bad light. Racism, slavery…these are a part of the United State’s history and it is important to teach our children and future generations to PREVENT such hatred from continuing. You can’t ban historical events. You just cant. It is like all those people who swear up and down that the Holocaust never happened. It just doesn’t work that way.

The Absolutely True Diary of a Part Time Indian is another one of these books. I am pretty sure the reason for banning or challenging is “Let’s not allow children to read this because it shows how horrible “white” citizens were to Native Americans.” I want to point out that my grandfather was not allowed to go to school with “whites.” He also left his education early and eventually went on to work into the Nuclear industry. My family never lived on a reservation, but they experienced poverty and bigotry regardless. This story broke my heart. Some of the events are from memories of Sherman Alexie’s life. How atrocious of a society are we?

Books like these are important because someone needs to teach future generations that there is no superior race and every other lesson that can be found in these stories. In fact, there are studies that indicate within in the next 50-100 years there won’t even be a pure “white” person. Color of your skin does not create a person. It does not indicate that you are better than someone else.

So now that some of my feelings and viewpoints are out of the way, let’s talk about the book eh? I think this book was well written. It made me laugh, it made me cry, it made me angry, it basically made me FEEL. That is why we read, right? To feel something after the book is over? The truth is, these are very real situations that happen. Maybe a lot of us put it out of our minds because we do not have direct experience with it. Sherman Alexie makes you feel from start to finish. For his first YA, this is a definite hit. I felt for Junior in this story. He was caught between two worlds. He was successful in the white world, but was failing in his own Native American world. He was a stranger in both. It took him deciding to go to a different school where he was the only Native American for him to discover the possibilities. To know he was strong and that he could do anything he put his mind to. That he could give his life purpose beyond alcohol and poverty and death and loss. Alcoholism is prevalent in this society.  I, myself, have to be careful because many of my family have a problem and have struggled.  I think Junior was successful in how he handled everything he went through. Every emotion. He had no one to really talk to, because he was always the outcast. Junior was the caged bird that broke free. He felt guilty, but he soared higher and higher.

If you haven’t read this story, I do suggest it. It is very moving. I only gave it 4 stars because I felt like it could have used a bit more. Junior went through a lot during that school year, but I wanted something significant to really happen. So that is just my opinion. If you read it, be sure to read between the lines for the full message of this story 🙂