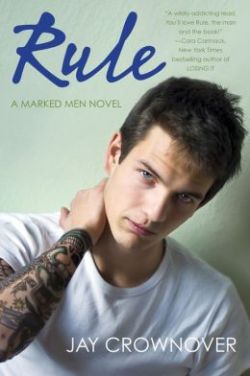 Do you ever read a book that takes you hostage? Consumes every part of you so that when you aren’t reading it, you are thinking about it? Dreaming about it? Trying to finish everything taking your time away from the story so you can just dive back into it head first? Yeah…well…this is that book.

So let me start of with saying, I know it won’t be everyone’s cup of tea. I happen to like tattoos…a lot. I think they look so delicious on men. I know not everyone does. This series doesn’t necessarily revolve around tattoos, but the main man in each book is tatted up, and each book is based on one of the men you meet in the first book, Rule. But that is what I am going to talk about, because I haven’t gotten my hands on the rest yet.

Rule, what can I say? Everything I want in a smutty book, I got. It wasn’t all smut though, there were multiple story lines and dramas. that were believable. Real life situations that I have seen on a daily basis with my own life or even with lives of those around me. Each character was believable. I know people JUST like each one of them. Each drama, each everything. So how about the sex? Yup…BELIEVABLE. I like a good smutty sex scene that is true. Let me explain. Some authors have a hard time writing a sex scene. Maybe it is because they feel awkward writing it, or don’t know which terms to use to get the point across. I have read scenes that weren’t even there. Literally, sex had been implied but not talked about or anything. Some books, the words were just so weird I couldn’t get passed how it was described because that is not how normal people like me refer to certain body parts, or even just to describe something. Ex: 50 Shades and calling her fun zone “my sex.” I am sorry, but I don’t know a single 23 year old, or virgin, who says that. Other words can be used if not outright but to at least describe it. In Rule, it was described in a believable way that was still tasteful. Also, I don’t generally read romance books. I just can’t buy the story. Its not because I don’t believe in romance, because I do. I just feel like they are so far from the truth that it gives false hopes. I feel (especially with the likes of Twilight) that everyone goes out looking for that “Edward” type..yes they exist. They do. However, I feel like when you are out seeking that, you might miss someone who has all the qualities you want, but just don’t show their hand at first meet and greet. Or, you look so hard, that you don’t see who they really are. So, I have an issue with books that don’t just lay it all out there. The “what happens after the happily ever after” is important to me.

Shaw is a very real and loveable character. You just can’t not like her. She is a “real” female also. She has issues, she has her dramas, and she is not all “woe is me” because she needs a man to save her. No. She wants to have a man, sure, who wouldn’t want Rule, if they can get past his issues, but she can. But, she comes into her own on her own. She starts living her life for her, she recognized how unhappy she was and went about being the real her. She was so unhappy trying to constantly seek approval or do what she was “supposed” to do because of her parents constantly dangling approval in front of her face but not making it attainable. She finally said forget it, she wasn’t happy, so she was just going to make herself happy. That she could be a doctor and still have a tattooed up boyfriend (or maybe one day husband). She didn’t have to have the suit and tie kind of guy just for “image” of how she should be living. She just became herself. And I like that.

Rule, your typical bad guy, right? Maybe. He had a lot of shit thrown at him from an early age. He and Shaw are a lot alike, except he never did things that wasn’t him, no matter who pushed or how they pushed. He was just dealt shit and took it when he thought it was worth it. He knew that people were weary of him because of his tattoos, and because he felt like he was unloved since he was a child, it didn’t matter. Eventually, it did matter.

This story was amazing. Seeing it from both of their perspectives. I love that about books, when an author will write from more than one perspective. You can really get an idea about what each person is thinking about each situation. So you can fall in love with the characters. I am looking forward to continuing on with the series. I even emailed the author to tell her how much I enjoyed this book. I feel like I need to scream it.

Here is my list of books with smut in it that I enjoy:

1. Anita Blake by Laurell K. Hamiliton. Sure. The scenarios are not believable as they are not real…werewolves..come on…but man..Richard can come to my house any day! Hamiliton’s scenes, though unreal, can be believed. Maybe it is because I know she writes these scenes from an oppressed place. That as Anita comes into her sexuality, it shows how Hamiliton came through hers. How sex is okay. (Because let’s face it..when it comes to sex, women are oppressed. We are supposed to not like sex because it makes us “slutty”, yeah…no thanks. I don’t buy into that nonsense. The sexualization of women is a real thing and the double standards are outrageous and misogynistic) It is okay to have good sex. Enjoyable sex. It is okay to fall in love and enjoy sex from that as well. That is why I enjoy it. Also. Man those scenes are HOT! For those of you who enjoyed the 50 shades, if you read the Anita Blake series, you will truly understand where 50 Shades fell short. In every aspect.

2. Wallbangers by Alice Clayton. That was enjoyable for the same reasons Rule was. Situations that were believable. Character that was real and most likely a lot of us have been there. And, the author wrote about the scenes in ways you could enjoy, were tasteful and honest.

3. Rule by Jay Crownover. Yup this book made my list. I will sing its praises until I can’t breathe.

Sure, there were some typos. But I have read typos in well known authors’ books. They happen. Shoot, I make them! I am sure I made some in this post. I try to catch them, but sometimes it is just not possible or easy to do so. Do I care? Nah. I try to fix them. I re-read what I write but I still seem to find them well after when I didn’t catch them the first 10 times. Are there many? Honestly I was too caught up in the story to notice them (except one which stuck out but wasn’t a big deal).

This is one of those books I had to get a review out of my system. I enjoyed it so much I want to just give a copy to everyone I meet. Shove it under their faces and say YOU HAVE TO EXPERIENCE THIS. Maybe they will love it just as much, maybe they will hate it. But you know, I gave it a chance and was sucked in. It felt real. I felt right there with them.  Do I think my review even gave the book justice? Nope, I don’t. Do I think my email to the author did? Nope, but I was being honest. I will copy the email here maybe it will help bring some sort of justice to Rule? We will see:

I am sure you get these emails often, but I have a few things I want to say. 🙂
First, I saw “Rule” on Goodreads when a friend of mine marked it as To Read. Then I marked it the same. I thought it sounded pretty good. After that, I hadn’t quite put much thought into it or finding it. It just so happens Rule found me. I was in Barnes and Nobles looking for a different book. I was in the Sci-Fi/Fantasy section. This particular B&N had one row of the Sci-fi section facing the beginning of the Romance section. I had turned around, and what do you know…Rule was just staring right at me! So I got it. I didn’t read it right away. I have this thing where I can buy a book I want, but it may be months before I finally pick it up to read. I have to be in the mood to read it. If I am not “feeling it” when I start reading, then I won’t finish until I am ready to read it. So I brought it home and put it up on my bookshelf until I was ready for it. I was ready for it yesterday. I finished just a few minutes ago.
I have to say this, I don’t like romance books because I believe that most of them are completely unrealistic and I can’t relate in any way to what I am reading. (For instance, 50 shades…ugh). I am a sucker for a good love scene. I think when an author can portray a sex scene that makes you completely devour the pages, then that is a good thing. My list of books and authors who I feel can do that, is small. The Anita Blake series always gets me. I know paranormal is completely fake, but her scenes are so well written that it almost sucks you in like you are there too. Recently, you just made that list. I felt their relationship was so real. I cried, I laughed, I was seriously going to shit myself if they didn’t get it together. The book made me so anxious, I had to know what would happen to them that I almost skipped to the end to see.
I even suggested this book to my best friend, and she knows that I don’t care for Romance books, but that I loved this one so much and I was only 100 pages in at the time really said something. She bought it. hopefully she starts reading it soon.
I really enjoyed reading this book and am looking forward the others in this series. I didn’t mind any typos or anything. Normally I do, but I was so sucked into the story that I just didnt care and didn’t see many. The last thing, I love how this story is completely real and believable. That is what I loved most about it.
Thank you for writing such an amazing book!!!!