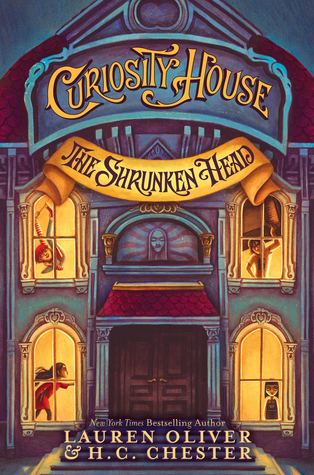 The Shrunken Head by Lauren Oliver, a Curiosity House Novel

The Curiosity House is a new series created by Lauren Oliver. It is set as a middle grade adventure, however, with the amount of death in the book, I am not sure middle grade is appropriate. It was still a good book.

The first installment of this series is surrounding a Shrunken Head, in which on the first night of the Curiosity’s show the Head was shown to the public, someone in the audience died later that evening. The Curse of The Shrunken Head spread in the news like wildfire shortly after. Suddenly, there are a multitude of mysterious deaths, which all get linked to the Head.

The police catch wind of the deaths rather quickly and are convinced it is murder, and attempt to figure out who the murderer is. The police are quick to accuse of Mr. Dumfrey of murder since he was the original owner of the Head and it went missing.

I believe, that though the 4 main characters were interesting, I felt that more could have been explained on who they are. You find out towards the end how they each ended up at the Curiosity House as a “sideshow” (pretty much). The story is told from each of the kids’ perspectives, however, you don’t always know who’s perspective you are reading right away

During the story, some of the characters had growth: Sam and Thomas mainly. Phillipa seemed more sure of herself at the beginning, but regressed through the book. Max remained the same “hardened” child through the whole story. I am hoping she starts to “break” in the next installment.

For originality, I gave this book a 5. I have not read many books that are based in Curiosity Houses (freak shows so to speak), so this was a good start. The story keeps you captivated, and can easily be read in 1 day. The fluidity of the story is so smooth, as a reader, it is easy to get through the story fast.
As previously mentioned, as a middle grade, there is a lot of death, but nothing too scary or inappropriate. The book had more mystery than fantasy as there was only 1 or 2 scenes for the Side Show, and the story as a whole is mainly surrounded by the children trying to solve the murders and save their Mr. Dumfrey. The children have a lot of adversaries, but tend to excel in whatever is thrown their way.