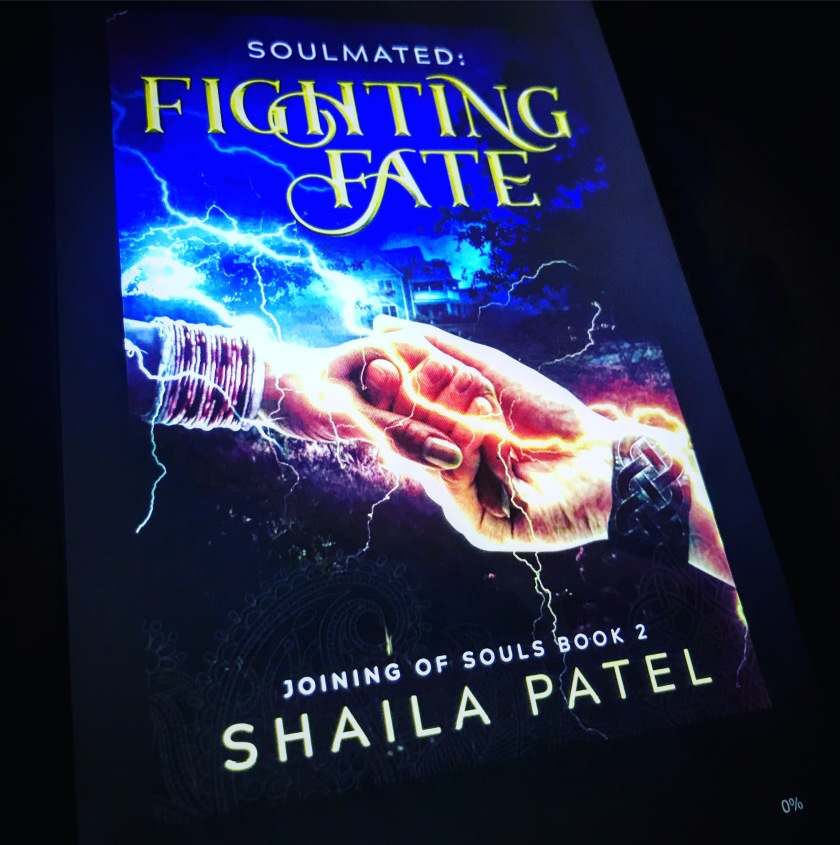 Fighting Fate by Shaila Patel, Book 2 in the Soulmated Series

I received a copy of this book by the author in exchange for my honest review. I have not been paid for my opinions, these opinions are my own. This review may contain minor spoilers

Every now and then, a series pops into my life and leaves me wrecked. Soulmated is such a fantastic series. The first book, Soulmated (you can check out my review here) left me in need for book 2 immediately. Alas, I had to wait AN ENTIRE YEAR before Fighting Fate arrived in my email. Just like in Soulmated, I am left with this high from the unique and original story line, and now I am dropping, and the crash is going to hurt knowing I have to wait another year to read book 3.

In Fighting Fate, we pick up where Soulmated left off. The joining that did not quite happen because of Liam’s fear of injuring Lucky, which resulted in Liam breaking up with her while he tried to figure out how to join without killing her, and left them both catastrophically wrecked for weeks. Their waves of emotions were so savage they barely slept, they could not breathe while away from each other, Lucky lost weight because she could not eat. As a reader, you feel their pain. You have been there, you have experienced that loss at some point in your life that leaves a hole in your soul that you cannot figure out how to fill back in. In some cases, we get better, use some duct tape to close the wound, and move forward with our lives. In other cases, the hole gets bigger, and consumes us more until we can no longer breathe. We have to decide if we will drown, or find that strength to keep fighting the waves before they take you under. This is what Liam and Lucky had to decide. They decided to keep fighting, to fill that hole together. They were faced with many adversaries, and many challenges are faced that will either make them stronger, or break them apart.

This book had so many twists. At one point, I thought I was going to have a heart attack. My chest began hurting, I felt physically ill. Shaila Patel has a way to keep you hooked from the first page, all the way until the end, and then leaves you full and empty all at the same time. It has been a long time since I have been so hooked into what I was reading that I could barely breathe. I caught myself several times holding my breath, trying to get through. Trying to ride this ride with Liam and Lucky.

This is such a wonderful series, that I highly recommend. If you would listen to at least ONE book recommendation from me, this series would be the one you should pick up next. This series is so original and a breath of fresh air to the YA genre. You will not be disappointed. I can promise you that.

I received a copy of Soulmated from the author in exchange for an honest review. I was not paid for this review. These opinions are my own.

Soulmated is the story about an Empath (someone who is often sensitive and affected by the energy or emotions of others around them) prince, Liam, who is on a quest to find The One in which he will become Soulmated with. The two would then become very powerful in the Empath community, of which there are MANY in the Council and even Elders who are leary of Liam finding a Soulmate because of the power the couple will have. Liam is searching for a female who his dad has visions about, someone on the cusp of becoming an Empath herself. Which leads him to a small town in North Carolina, where he meets Laxshmi, or,  “Lucky.” The two go on one hell of an adventure which takes the reader on a wild and emotional ride.

This book will literally steal your heart and capture your soul. This book left me so hungover, I felt like a junkie desperately searching for my next fix. This book left me so shattered, I couldn’t breathe, see, or think after I finished. The last time I felt this raw after a book was when I read I’m Still Here in 2014.

The story is very beautifully written, making the reader feel every raw emotion. It was such an easy read, but didn’t feel “simple” at all. I like to do most of my ratings on how I feel or connect with a book, and this book just sucked me in. I was a goner from the very beginning. It is one of those stories I want everyone to read because it is so great, but also want to keep it all to myself like a jealous lover (I will rip off a ladybug’s wings, I swear it, I will) afraid to let anyone else close.

This book can be enjoyed by high school and older. It is a young adult, but does not feel “kiddish” like some young adult books can come off like. I didn’t find myself frustrated with Lucky and her constantly wallowing in her head. I think Patel really wrote the story in such a way that it didn’t put the story down because the character couldn’t stop questioning every little action….because of what Lucky was experiencing, it made the constant self-doubt very understandable and acceptable. I loved reading the changes in Liam as he grew towards Lucky. I equally loved reading how Lucky really came into herself.

I LOVED Lucky’s mom…I know Lucky and her mom are constantly at war with each other, but I really enjoyed her. My one real qualm with the book is the Indian terminology used, not because there were Indian terms in it, but because for majority of the terms used, I had no idea what it was and my Kindle would not translate it, or would give a translation to some other word that I knew was not correct because it wouldn’t fit with the sentence. There also was not a dictionary of those terms that I could find in the book, which may have been helpful, especially because they appeared to be slang terms. I didn’t knock down the rating for this primarily because I didn’t feel like not knowing the terms took away from the story. Some of the words were types of endearment, and some were directed towards people, but I didn’t understand why, and that was mainly it.

So, as a recap….find the book Here on Amazon and give it a go!!!! Seriously!!