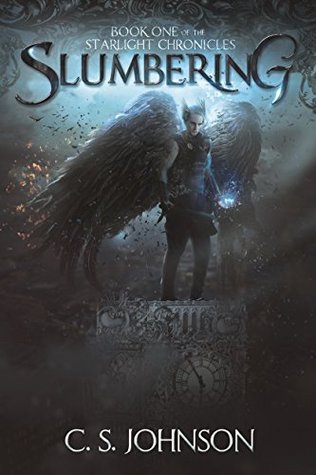 I received a copy of Slumbering in exchange for an honest review.

Slumbering is an uniquely, original, YA epic fantasy about a teenage boy that learns he was once a warrior for a Star Prince and at some point was sent to earth where he became human until his powers unlocked. As such, this story is about his “acceptance ” of responsibility for his role to fight off evil demons and protect his friends and community (the latter more so out of obligation than desire).

Even though I have given the book 5 stars, I absolutely cannot stand Hamilton Dinger. He makes the story hard to get into because he is so narcissistic it makes the story as a whole almost unbearable. Dinger thinks he is God’s gift to humanity (even though he would not agree that he was God’s gift…just a gift to everyone through nature ). So why the 5 stars? Because I couldn’t put it down and I found myself secretly hoping he gets it together and stops being such an asshat.

The book is a fairly quick read and flows well. It is also a completely original epic fantasy YA, which is hard to come by these days. It offers a unique story that is intriguing and will spark curiosity for the rest of the series and intrigue as to how this war will ultimately go down.

As much as I can’t stand Dinger, I am hoping he has a lot of character development that makes him a more likable super hero. It is entirely unfortunate that a jerk like him gets something so awesome and he continues to be arrogant. We all know what happens to arrogant superheroes.

The bulk of this story is to set up the characters in the story line, introduce some of the demons and what their end game is, as well as, portray Dinger as a jerk. Honestly, I don’t feel sorry for anything that happens to Dinger.

If you are curious about this book and would be interested in reading it for yourself (which I recommend) you can check it out: Amazon

Keep posted as I am currently listening to the next installment of the story!