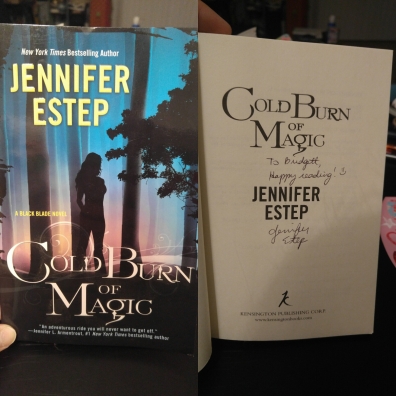 I received a copy of this book at the RT Booklover’s Convention in May 2015. I was super excited to get to meet Jennifer Estep as I am a HUGE fan of her Mythos Academy series. Estep is super nice and very humble.

Cold Burn of Magic is the first in the Black Blade series. Based on the first book, I am not entirely sure what the series as a whole will be or how many books. This new series has monsters and magic, but you only ever see the pixies, loch ness, and what what magic someone may or may not carry. I do think this series carries a lot of promise and that perhaps this first book is more of prepper, getting the whole of the story ready. There was some excitement and drama, but not until the last couple of chapters. I figured out who the bad guy was pretty early on. The rest of the series will, I believe, focus around the bigger picture conflict with probably some obstacles here and there. (My guess).

I only gave it 3 stars because I felt like there could have been more. More action, more monsters, more magic, more to the story,  and more of the other characters. My hope is the next books will give me the “more” that I look for in Estep’s books! I will continue on with this story, as I said before, I believe it carries a lot of promise.