I was provided a copy of Christmas Chimney Challenge by the publisher in exchange for my honest review.

In this 4th book on Willy Nilly’s adventures, Willy is writing a Christmas list for Santa along with his sister, Suzie.  After a trip to town to see all the lights, Willy becomes upset that he does not have a chimney and fears Santa will not be able to get to them and give them their gifts. Suzie tells him that Santa would use the back door, but this is not good enough for Willy. While in town, an elf had given Willy a satchel of magic glitter. The next day, Willy decides he is going to make a chimney for his house, only he made several chimneys with a bunch of rubbish from the junkyard. Willy felt that if he made several chimneys then they would get MORE presents. After the chimneys were built, Willy dumped the magic glitter into the chimneys. On Christmas Eve, Willy checked on the chimneys and noticed they were glowing. Him and his dog were sucked into the chimneys and landed in a cold, snowy area. Willy and his dog ended up rolling down the mountain in the North Pole as a giant snowball and landing next to a toy factory where he found a very sad elf. Willy couldn’t believe why the elf was so sad when he got to work with toys all day, but he learned that it is because suddenly a bunch of chimneys popped up and the elves would have to make even more toys and may not be done in time for Christmas. Willy felt very bad and indicated he could take them down. In order to get home in time to do so, the elf had a reindeer fly Willy and his dog back home. Once he got home, he noticed that the storm they flew through had knocked down all the chimneys. Though Willy was happy to have helped the elves, he was still sad that he may not get any gifts from Santa because he did not have a chimney. He learned Christmas morning that this was not the case and went into the living room and found many presents under the tree.

As always, this story was really cute, well written, and wonderfully illustrated. This is the 3rd Willy Nilly book I have had the opportunity to review. I am looking forward to purchasing paperback copies to go into my son’s library so we can read them together. I like that Willy goes on adventures but that he always learns something in the process. The illustrations marry the story perfectly and it is easy to see how any child would love it.  I look forward to reading more of Willy Nilly’s adventures and sharing them with my son! As always, Chris Stead has delivered another wonderful adventure.

I always enjoy reviewing for Old Mate Media, I am happy they reached out. Christmas is my favorite holiday and I love Christmas stories very much.

I received a free copy of this book from audiobookbookblast.com in exchange for my honest review.

This story was super cute and heartwarming. Believe it or not, there were parts that had me on edge a little waiting to see what happens. I am glad it worked the way it did for Jingles. This is a cute story for children. My job entails sometimes transporting young children and this is a book I will definitely share with them.

I received this book from Audiobookblast.com free in exchange for my honest review. I have not been paid for my review.

This book was cute, and quick. The big hang up was the narration. The narrator was fine, however, the quality was sub-par. There was an echo to the narration and it felt like it was being narrated far away from the microphone. Cute book for kids!

This book should be able to hold a child’s interest. And it is true, sometimes are little furry friends find us, not the other way around!

A Tale Dark and Grimm by Adam Gidwitz

I may need some time to process this story. It took me approximately 16 days to get through it. It normally does not take me 2 weeks to read a book. This book was roughly 260 pages. I can generally read that in one sitting.

This book is basically about Hansel and Gretel and them going through multiple stories of the Grimm fairy tales. This book was gruesome in parts, over the top in parts, and wildly entertaining in others. Is it my favorite retelling I have ever read? No. Will I continue on with the series? Eventually. I am not in any rush. I think this book would probably be great as an Audiobook. There is some extra outside dialogue in the pages that is very entertaining and I think a narrator would have been perfect! Specifically I think Nick Podehl would have been great! (He narrates the Chaos Walking series by Patrick Ness).

I do think the mashup is pretty nice and different. I like how two children from one tale made their way through a chunk of their life and intermingled with other tales. Even though it took me some time, it was a nice, easy, read. I don’t really know what took so long, especially since I was reading and completing other books. I think, mainly, I had to read it in parts to maintain my interest. Hansel could be a bit much from time to time, but so could Gretel, and I would find it annoying. That is where I leave it, great writing, just okay characters, and gruesome (sometimes hard to believe it is a children’s book). 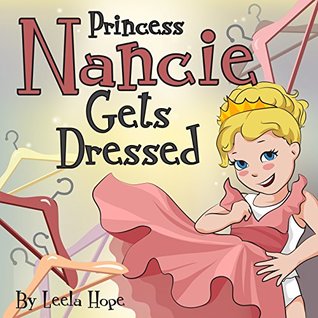 Cute little story. There were a few typos in it, also didn’t format correctly for me for my Kindle. I think that the more appropriate age range would be 3 to 5 as Nancie is 4 years old. I do not really see an 8 year old appreciating the story, at least this story the same way a 3 to 5 year old would. From what I can see, there are multiple Princess Nancie books, so perhaps the older range would like those, but since this is the book I read, it is all I have to go off of.

This story is about a 4 year old little girl named Nancie who is allowed to dress herself for the day’s adventures. It tells of the struggles she goes through to get dressed and how her mother encourages her to keep going and not give up. Her mother does however make her change into something different. I do think that dampens a child’s creativity, so that lost a star for me. I know that if you let children dress themselves, some children would pick out the most insanely wildest things, but I think that is the experience of it all. That is the point and purpose.

Still an overall cute story, more for a target audience of preschool/kindergarten age range. I work around young kids a lot, so it is nice to have something kid appropriate to read if I need it. Leela Hope’s books on Amazon are fairly inexpensive. I found this one free for Prime, most are also free for Kindle Unlimited. However, I did see that the paperback version was about $9, which I feel is a bit pricey.