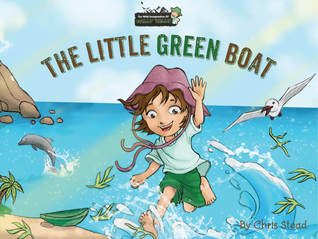 I was provided a free copy of this book in exchange for an honest review.

The Little Green Boat  is about a little boy named Willy Nilly who has a trip to the beach planned with his parents. When Willy Nilly gets to the beach, he goes exploring and finds a little green boat. This little green boat takes him out into sea. Willy Nilly becomes very hungry he becomes determined to find food. Two dolphins swim up to him in the boat and inquires about what is wrong with Willy Nilly. Willy Nilly tells him he was taken out to sea and he is hungry. The dolphins offer to bring him to land, however, the land they bring him to is not the same as from where Willy Nilly departed. In search of food, Willy Nilly begins to traverse the island and pass monkeys who throw things at him, bats in a cave, alligators that try to eat him, up a mountain to where he finds a chest full of food. At the bottom of the chest is a note with a number and a phone to call for help. Willy Nilly calls the number, and before you know it, a helicopter comes and picks him up and brings him back to the beach his parents are located. His parents are just sitting down to eat, but Willy Nilly is no longer hungry and wants to go play.

This story was very cute. I really enjoyed Willy Nilly and his adventure for food. A kid after my own heart! I think this story is very light and enjoyable for kids. I believe it will keep a child’s attention throughout the story. I think, in the future, Willy Nilly should have a female friend go on these adventures as well. I think it would be great for young female readers. Working with children, this will definitely be a book I let my clients read while sitting in my office. Willy Nilly’s adventures on The Little Green Boat are fun and require Willy Nilly to be smart and brave. These are great factors in stories for young readers.

To find out more about the author and see the rest of the series, visit Old Mate Media