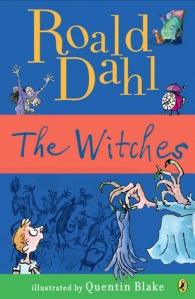 The Witches by Roald Dahl

Does anyone else think that Roald Dahl’s imagination was one of nightmarish proportions…or is it just me? Let’s take a look at some of his works. There are giants that steal children in their beds and eat them; there is a delicious chocolate factory that has inventions capable to turn children into blueberries or even shrink them; an ogreish couple attempting to capture birds for a bird pie dinner meant for two; 3 mean farmers attempting to kill an entire fox family; a young boy who goes on a magnificent journey inside a peach with his backyard buggy friends….so why not a story about witches who come up with a superb plan of turning all the children in England into rats so that their parents and loved ones would squash them in fear?! Sounds like a good time to me, to be honest. So, because I have thoroughly enjoyed listening to Roald Dahl books, The Witches was no different. I began listening to this story while I was getting ready in my hotel during my training for work. I liked it. Started out in true, scary, Roald Dahl fashion, you know, creepy… In the first chapter a little boy and his family were in a car wreck on the way to the grandmother’s house in Norway, of which his parents died. He ends up staying for a period of time with his grandmother in Norway who tells him stories of real live witches that live in Norway and various examples of their existence. One day, a lawyer comes by and informs the grandmother that per the will they must return to England so that he can continue school there. While back in England, his grandmother got sick. As she got better, they went to south England for a nice little retreat of the health. I want to point out, that at this point in the story, I was driving home from training, when I had a sudden realization. This story sounds an awful lot like the movie The Witches that came out in 1990. You know the one right?

Mind= BLOWN. I had NO idea! None! Granted, I was 5 when this amazingly awesome movie came out, how was I supposed to know that it was based on none other than Roald Dahl’s exciting story, The Witches! I didn’t even know who Roald Dahl was! Do you know how long it took me to make that connection for most of his stories that became movies? I had never read a single Roald Dahl book until Charlie and the Chocolate Factory LAST year….I know, I should feel ashamed to even call myself a book lover. Trust me. I am currently making up for this lack of Dahlacation by attempting to read or listen to EVERY BOOK he has ever put into existence!

So after this realization, I think it is safe to say I did what any movie lover does if they happen to see a movie first, I compared it the whole time I listened. Bad Idea. Why did I not learn my lesson after reading Jurrasic Park when I was 16? I figured the book and movie would be pretty close…and though they are, the endings are COMPLETELY different. The movie leaves you feeling happy, the book leaves you feeling depressed. My Dahlacation shall continue with an open mind, an open heart, and an endless love for the creative mind Roald Dahl left in this world.