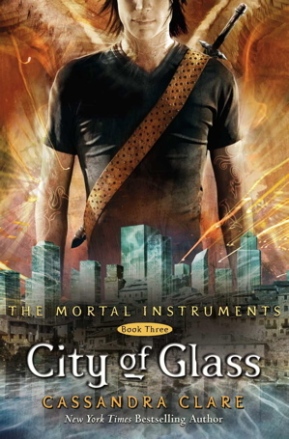 Before I continue on with my rating and review of City of Glass, by Cassandra Clare…let me kind of recap my feelings thus far into the series. I started blogging much later, and need to go back and do some reviews on some of the books I read this year. Probably not all 108, but some of my favorites. That being said, I most likely will not give City of Bones and City of Ashes their own reviews, but will briefly touch on them before City of Glass.

I read City of Bones years ago. I didn’t understand it and couldn’t get into it. Therefore, I never progressed with the series. One reason, besides not understanding, was this whole Jace-Clary-Incest thing. As someone who finds that disturbingly disgusting, I just never went forward. Earlier this year, I read Clockwork Angel and Clockwork Prince. These two stories, from Cassandra Clare’s prequel trilogy, really helped me understand City of Bones and I decided, incest aside, to give it another go. So I read it again. My aunt in fact bought me the first 4 books, so I almost felt an obligation to read them. Perusing through the back of the covers to see the progression, I read that Jace and Clary started dating (in the 4th book…technically end of book 3), I kind of freaked. So I did a little digging and asking around, to find out that along the way they discover they were lied to and they were not related. So! I put aside that disgust I felt, and started the series. During City of Bones and City of Ashes, the sexual tension between Jace and Clary was intense. And I kept saying to myself “they aren’t related…”but, going into City of Glass, I felt that that plot needed to fizzle out soon because it was bordering absolute disgust. City of Ashes was a great book. So far, it has been one of my favorites of the three I have read. The emotions of Clary towards Simon and trying to save his life, ultimately turning him into a vampire to do it, to the struggles of discovering more about her powers to create more ruins, everyone had to make decisions they weren’t proud of, or that weren’t easy. Pushing on and persevering together, each in their roles.

It’s no lie, but Magnus Bane is pretty much my favorite character, as is Luke. But for the sake of the general review of the first two books, I loved Magnus in City of Ashes and was glad he was more predominant than he had been in City of Bones,. In City of Ashes, watching the struggle of Magnus being in love with Alec but Alec (because he is a Shadowhunter) not being allowed to be out in the open about his own feelings is heartbreaking. At the same time, “in real life,” situations like this happen all the time. I think that Clare wrote these struggles in a respective manner that can bring understanding and sympathy into the readers’ minds for these two. I mention this situation specifically, because this relationship develops further in City of Glass, and one of my favorite scenes was between Alec and Magnus, so I felt that this particular blurb needed to be mentioned!

Now, for City of Glass! Overall, I give this rating 4 stars out of 5. I enjoyed it, but I felt like a good chunk of the story was “filler,” like I was in college all over again just trying to “spruce” up my research paper with a few more words or lines about nothing. For the parts that were more than just filler, there were a whirlwind of emotions. New characters were introduced and other characters really started shining through.

Sebastian Verlac: Will the real Sebastian please stand up? Oh wait, he can’t because he is dead! So…who is this impostor? None other than Jonathan Christopher Morgenstern, Clary’s real brother. I knew something was off the moment Sebastian was introduced. The way he casually was  everyone’s friend. Flirting with Isabelle, attempting to be kissed and seduce Clary with failure, the anger at the ultimate rejection by Clary. In Valentine’s weird way, he absolutely LOVED Sebastian and was happy with how Sebastian turned out.

Isabelle Lightwood: Not a new character by any means, but in City of Glass, I felt she was more of that normal, 16 yr old bitchy, “someone give her a chill pill,” female. She was in this book more than the other two. I felt like her emotions, true to her age, were all over the place. Hot and cold. But Isabelle’s heart was always in the right place. The stress of being a Shadowhunter coupled with the emotional strains of being a young, 16 year old girl trying to figure out who she is gives her that edge/kick in City of Glass that she hadn’t fully had in City of Bones and City of Ashes.

Jace and Clary: I will lump them together. Most of the book dealt with their struggles of 1) being in love 2) being siblings and 3) saving Alicante from Valentine. Clary was a bit more whiny in this book. Jace a bit more of an ass than usual. Each one of them act and speak before they think and neither one of them think of how their actions will affect others around them. They fly by the seat of their pants. Act on whatever the first whim they have is and out they go! I really loved the scene with Raziel. As far as Clary and Jace interactions, Raziel was my favorite scene. If you haven’t read the book, I won’t give any spoilers. If you haven’t read the book, they aren’t related, so just try to swallow that incest bit down knowing they aren’t (that is what I did…).

Alec and Magnus: I will clump them together as well. Alec had a lot of growth between City of Bones to City of Glass. He really stood out, and always let people know he was “18 and the adult” of their little group. So. What is my favorite scene of the entire book? What scene had me laughing so loud while I was reading silently in my room? *ahem Spoiler Alert* During the last 100 pages or so (when all the good bits of a book happen), Shadowhunters and Downworlders needed to be paired up to be marked with this rune that Clary  had to bind them to share powers. Alec decided he wanted to be Magnus’ partner (for battle and actual partners). That he was finally ready to be out about it. So instead of introducing his parents to Magnus, what does he do? He looks across the room trying to find Magnus, when he spots him, walks right up to him and starts making out with him…in front of everyone! Seeing as how you are not allowed to be gay and a shadowhunter, this caused a lot of stares, gaping mouths and maybe a few chokes here and there….followed by the uncomfortable awkward silence. Magnus stressed a few times that he didn’t want to be hidden, that no real relationship could truly survive if people that you loved and cared about didn’t know who or what you were, or who you were in love with.

How did it end? Well, that I think you need to find out for yourself. I don’t like giving away information…okay well too much information. City of Glass is no quick read, but once you get through some of the unnecessary extras, the character development is pretty spot on. I hope that City of Fallen Angels (book 4) doesn’t disappoint when I pick it up after the holidays.

Also, I clearly left out a few characters…if you want to find out what happens to Jocelyn (Clary’s mother), Simon, Luke and all your other favorite characters (or could be favorite if you started to read the series), I would suggest picking it up and giving it a go! I clearly didn’t include A LOT of information either. City of Glass has multiple story lines, and this review should not and could not reflect almost 600 pages worth of a novel, it is not a book report…just a review of my take, feelings and favorites about the book. If you haven’t started the series but are interested, I know I gave away 2 tidbits and I won’t apologize! (I feel from my own experience that the incest plot line needed to be snuffed out before I could continue on with the story). It was creepy how thick Cassandra Clare played that one out. All the other character’s internal struggles, figuring out who they are in this world…that is for you to discover on your own. I have enjoyed the ride so far, and am curious how the rest of this series will play out.