Last night, while sick in bed, I decided I would watch The City of Bones. I have been looking forward to this movie since before it came out. After re-reading the book a second time, to try to get into it or get a better understanding of The Mortal Instruments in general, I was even more excited for the movie’s release.

Let me be honest, my main intentions of ever really wanting to see the movie to begin with was Jonathan Rhys Meyers, because let’s face it, he is delicious.

After reconnecting with the book, and understanding each character as they were created, I had high hopes for the movie. But what was I thinking? We all know that movies sway from the books, we all know that some information has to be eliminated for the sake of saving time and money, but who makes the decisions of what information to relay properly or to delete altogether?

1. I liked who they chose for Clary. Lilly Collins was a good choice, If I had to choose an actress, it would be Lilly Collins.

2. I liked who they chose to play Simon. I have never seen Robert Sheehan before this, but he brought life and character and all the zany quirks of Simon to life.

3. Godfrey Gao as Magnus Bane (but I have dislikes regarding Magnus Bane in general, but let’s not get ahead of ourselves). I believe that Gao embodied what Bane is supposed to be, or at least he got pretty damn close to it!

4. Jonathan Rhys Meyers. I don’t even care the capacity of which he had a role, just that he had a role! Though, I wish it was not as Valentine, as he is nothing that I imagined Valentine to be, and not to my surprise, a lot of avid readers/fans of TMI felt the same.

5. I like that the movie kept going. It was a constant ride, full of loops and turns. Non stop action. It pretty much just leaped right into business.

1. Jamie Campbell Bower as Jace. Okay. He was good in Twilight. During most of the movie, I preferred him when he kept his hood up. That hair was atrocious! I know, I am not supposed to be critiquing his hair. But Jace is supposed to have a wild mane! Full of golden locks that you just want to lace your fingers in and take a grab! I wanted to wash Bower’s hair and flat iron it out to make it the long white blonde hair of Caius from Twilight. I like Bower. Just not as Jace. He did not embody Jace’s ruthless, hard shelled, take no bullshit attitude very well.

2. Magnus Bane. I was a little disappointed with the ultimate portrayal, writing of the character in the movie. Having read the first two books of TMI and all of the Infernal Devices, I had higher hopes. First, there is a mild hint, and I mean MILD, hint of the ultimate relationship between Bane and Alec. Never once does the movie really show that Alec has a strong pull towards Bane. Plus, I wanted Bane to be more OUT there. Like he is in the books.

3. The fact that Jace and Alec are paraboti. I don’t know about you, but if the book mentions this detail, to explain the bond between Jace and Alec….it should probably be mentioned. As it is the MOST IMPORTANT RELATIONSHIP a Shadowhunter can have. Just saying.

4. The Vampire’s Lair: Simon didn’t turn into a rat at the party.  Alec and Isabella didn’t turn up to help Jace and Clary rescue in the book. And what happened to Raphael? He was kind of important in that scene in the book and is used later in the series…I am pretty sure Elyas M’Barek is supposed to be Raphael, but he was only briefly filmed. If you weren’t watching, you might have missed him entirely.

5. The one thing, other than who they chose as Jace, that really upset me was Luke. I loved Luke in the books. The movie barely gave him the time of day. In fact, pretty much everything that happened regarding Luke in the movie, was backwards or happened at the wrong time in the movie. I wish they really had honed in on the importance of who Luke is. They didn’t mention he was a Shadowhunter. They didn’t mention the families involved with Valentine’s circle. They didn’t mention that Luke had loved Clary’s mother, that Valentine had been the cause of him turning into a werewolf OR that Valentine had wanted Luke to kill himself after he was bitten! I am sorry, but these are key for later in the series! These are important pieces of information! How do you not include such things?!

If you haven’t read the books: I give this movie about an 8.5 out of 10. I try to be impartial. Movies are never like their book counterparts. So I tried to watch it from two standpoints. 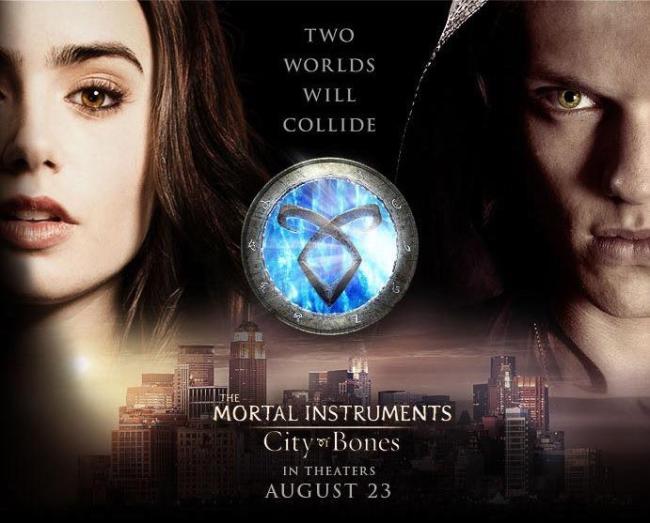